Alan Greenspan was in India recently. Most didn’t know that. A lot said “Greenspan Who?”

Not very long ago he was like “Apara Kalidas”. Legend says that what ever Kalidas said became true. Once day when was drunk he was cornered by the king and asked what day it was. Totally smashed that he was, Kalidas said “Full Moon Day” on an Amavasya (“No Moon Day”?). Godess Saraswathi to make his words come true threw up her jewel in the sky and lit up the sky like a full moon day. Greenspan could move markets like that – not too long ago. Now no one cares.

I never liked him. I am too emotional in my decision making, anyways. I hated him when it seemed that he sided with Bush’s tax cuts and policies to get another term extension. That did it for me.

So he was in India. And, no one seemed to care. He warned India and China against having too much regulation. Predicted we are hurting long term growth with over regulation. Blamed the economic crisis on too much saving in 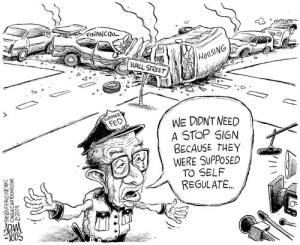 developing countries that did not have the “infrastructure for consumer spending”. Said a meltdown is inevitable in a bubble bust cycle … if not the real estate bust … it would have been something else.

Such a contrast with an interview in Mint today with ex-RBI Governor Y.V. Reddy. He sounded like a regulator should “Kadoos” – even though he has retired. (… said empirically it is yet to be proven if regulation causes low growth rates … and it may be necessary to make “Financial Stability” as one of the main objectives of RBI and other central banks … how true).

Alan Greenspan is many ways symbolises what is wrong with the US … unwillingness to accept mistakes and see the harsh reality at hand. No wonder there is a political storm to retain the current shamefully flawed health care system. Lobbies lobbies !!

Y.V. Reddy represents what has always been right about India … take the middle path of avoiding extremes, have patience and take a long term view (in fact it’s probably come from our karma model … to think we have endless life-death cycles and hence there is no escape from bad deeds !!).

Reading the two interviews in a span of two weeks is such a contrast. Greenspan giving “know it all sweeping statements” and not taking any responsibility …. and Y.V.Reddy answering every question based on evidence and rejecting three questions saying he won’t speculate … and not taking any credit for his achievements in averting a meltdown in India.

We should be proud and happy our regulators are “like this only” !!

A dad. A partner. A son. A problem solver. A learner. A teacher. View more posts